Two weeks ago, my girlfriend and I were vacationing in Japan and looking for something to do for a half-day in Tokyo. “What about visiting a sake brewery?” I asked, and she agreed. After a quick Google search, I soon found Ishikawa Brewing Company, who makes Tamajiman in Fussa city on the western side of Tokyo. Since it appeared to be very near to a train station and Tamajiman was one of the three brands selected in Tippsy’s April sake box, I thought, “Why not go?” Right away, I made a reservation for a tour.*

From Shinjuku Station to Haijima Station

At Shinjuku Station, we took the “Holiday Rapid Okutama-Akigawa” line and departed at 8:19 am. It's an express train that runs on Saturdays, Sundays and holidays. Although the train was mostly vacant, some passengers seemed to be hikers headed for Okutama, the final destination of the train. We got off at Haijima Station at 9, which was plenty of time since the tour we booked would start at 10:30.

A walk to the Tama River

Since we had 90 minutes before the start of the tour, we took a short walk to the Tama River, which flows near the brewery. The riverside is lined with sakura trees, and luckily, the trees were in full bloom. After enjoying sakura blossoms on a sunny, peaceful morning, we headed to the brewery. Cherry blossoms alongside the Tama River

Getting to the brewery

The brewery was very easy to recognize—an extraordinarily long wall and huge white-walled buildings suddenly appeared in a quiet residential area in the city. We went through the main gate on which a large sign that says “Tamajiman” is nicely displayed. The hongura, or the main brewery, is right in front, and to the left there is a shop named “Sake Cellar.” The site was fairly quiet and there weren’t many people. The tour started right on time at 10:30. In addition to the two of us from Hawai‘i, a pair of ladies who seemed to be very keen on sake and a group of three men participated in the tour.

We met Ms. Ishikawa, our guide, and after a few words of greeting, she briefly explained about Ishikawa Brewing Company and the outline of the tour course. Because of her last name, I thought she might be a member of the Ishikawa family, but when I asked her about this later, she said she is not. It seems there are many Ishikawa surnames in this area.

According to Ms. Ishikawa, the brewery was founded in 1863, at the end of the Edo period. The brewery at the time of its establishment was located on the other side of the Tama River, in the present Akiruno city, producing sake named “Yae Sakura.” In 1880 the brewery moved to its present location, and in 1933 the current brand, “Tamajiman,” was born.

From 1887, the brewery also produced lager beer called “Nihon Bakushu” (lit. Japan Beer) for two years. After that, beer had not been produced for a long time, but in 1998, it was revived for the first time in 111 years. Today, the company still brews craft beer with distinctive brands of “Tama no Megumi” and “Tokyo Blues.”

Tamajiman is carefully brewed by a very small number of 4.5 people, led by a young toji, or brewmaster. I wondered, What does 4.5 people mean? Is one person a trainee or something? I’m sorry, but I forgot to ask Ms. Ishikawa what she meant by that.

Tamajiman is made with the old-fashioned kanzukuri method, in which sake is brewed only in cold months from fall to early spring. In spite of the kanzukuri, the brewers are not seasonal workers but work year-round as full-time employees. “They’re in charge of various tasks in the company even during off-season just like now,” Ms. Ishikawa said. At the time of the tour, they were working on setting up koinobori, or carp streamers, preparing for the Children’s Day holiday in May.

The hongura, the main brewery The tour started at the hongura, the main brewery, which is about 75 ft wide, 42 ft high and 100 ft deep. It was built in 1880, when Ishikawa Brewing Company started making sake at its current location. All sake from the brewery is made in this historic building.

Inside the hongura was dark and cool. There, we did the first sake tasting. The sake was Tamajiman “Junmai Muroka,” a smooth junmai with gentle umami. Koshihikari rice is used, and the rice polishing ratio is 70%. I bet it would be even more delicious if warmed.

While drinking it, Ms. Ishikawa explained the basic process of making sake, the difference between sake rice and food rice and terms commonly used for sake brewing. Sake tanks lined up inside the hongura.

After visiting the hongura, we walked outside listening to Ms. Ishikawa’s explanation about facilities on site. Including the hongura, six buildings at the site are registered as national cultural properties. These historic buildings include: the Nagayamon gate which is believed to be built before 1775, the bunkogura (book storehouse) built in 1863 and the zogura (miscellaneous storehouse) built in 1898. Seeing these old buildings was definitely a rewarding experience.

In addition, the second floor of the zogura is open to public as a museum. Many historical materials of Ishikawa Brewing Company are displayed. Admission is free. The museum inside the zogura.

Tamajiman is brewed using natural groundwater that is pumped up about 500 feet underground from the site. It is medium-hard water, and because of the nature of this groundwater, Tamajiman tends to have a gentle mouthfeel. “Some of our local customers ask us to make sake that’s bone-dry,” Ms. Ishikawa said with a wry smile, “but it's hard to make dry sake using our water.” The brewery’s natural groundwater greatly determines the taste of Tamajiman.

After the walking tour, it was finally time to taste samples of Tamajiman. We moved to a cozy tasting room located on the first floor of the zogura.

There, we sat in prepared seats and tasted five types of sake:a daiginjo, a junmai daiginjo, two different kinds of junmai nama genshu and a plum wine. By this time, the participants had become familiar with each other, and it was fun tasting while sharing our opinions and impressions of each sake. 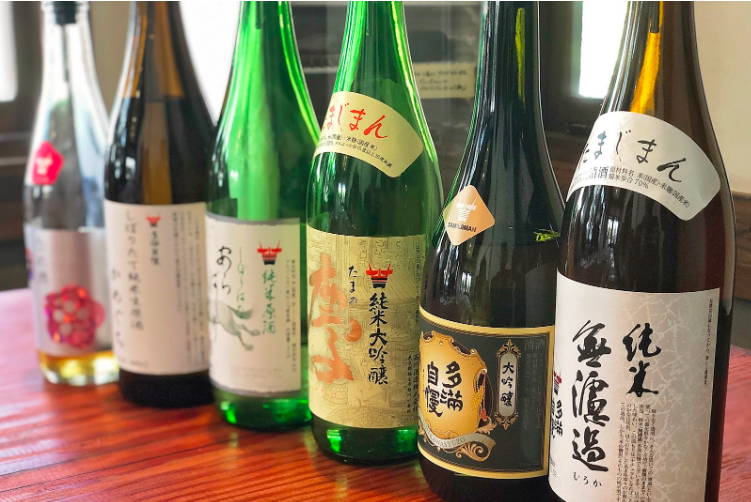 Samples of sake we tasted.

Forgetting that it was still morning, I drank a considerable amount of sake! The last sip concluded our fun 45-minute tour. As a souvenir, each participant received a small sake cup with the Tamajiman logo on it. Tipsy a bit, we left the brewery feeling good.

**We took a regular tour for Japanese-speaking participants, but the brewery also conducts tours in English. A reservation is required. For more information, please go to the brewery’s website. A Honolulu-based graphic designer with a keen interest in sake, Hayataro is in charge of producing creative materials for print and web at Tippsy. In Hawai‘i, he is the principal creative director at Studio Elepaio, a visual studio specializing in art, graphic design, illustration and photography.